About $17,000 was divvied up among three Wimberley organizations yesterday by a committee assigned the task of distributing money left over from the sales of the book about the Memorial Day 2015 Blanco River Flood.

The book was underwritten originally by the city of Wimberley, the Wimberley Institute of Cultures and the Wimberley Village Library Foundation.

The funds were given out during a ceremony at Wimberley Valley Radio, 94.1, to the Barnabas Connection, the Wimberley EMT organization and the Wimberley Fire Department. All three entities were instrumental in providing first response and follow-up in the first few days after the flood, which destroyed more than 300 homes in Wimberley.

The library was the official publisher of record for the book. The team that produced the book included Carroll Wilson, then circulation director of the library; Nancy Williams, local author and volunteer; and Steve Klepfer, former mayor.

In 2017, the Texas Oral History Association named the book the winner of the Mary Faye Barnes Award for Excellence for Community History Projects.

About 1,800 books have been sold of the 2,000 printed. Books are still available at the Old Mill Store in downtown and at the library. 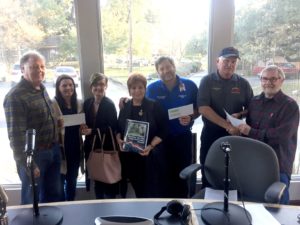