The Wimberley Village Library is planning for a future in which it provides new services, new programs, and new spaces for all of its patrons.

Our expansion is for the young people of today and tomorrow, as well as for members of the community who look to the library, not just for materials to read and watch, but also for an environment where group learning and collaboration can take place.

The Wimberley Village Library Foundation was incorporated as a Texas nonprofit in 2005. The foundation is a 501 (c) (3) non-profit, tax-exempt corporation. Its purpose is to build community support and raise funds to provide the tools and facilities necessary to advance learning opportunities at the Wimberley Village Library. The foundation is governed by a board of directors members of which are elected in accordance with Texas law and bylaws of the organization. The board of the foundation have determined that our funding base for the expansion should be a minimum of $1 million. 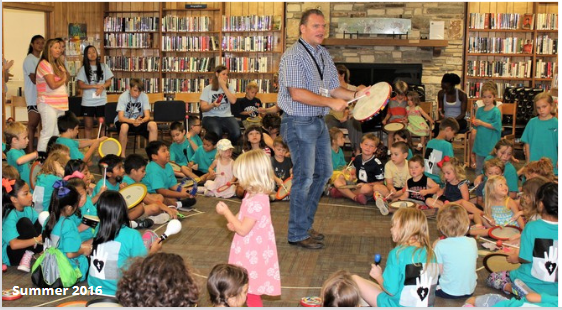 Who is overseeing the planned expansion of the Library?

The Library District Board of Trustees is ultimately responsible for all Library expenditures and operations, so they are the overriding authority. They have bought land adjoining existing Library property, hired a project management firm to oversee the entire venture in concert with an appointed building committee, hired an architecture firm to create plans, and are closely involved with Library foundation fund-raising efforts. When the time comes, they will hire a construction company.

Where can I see drawings of the planned expansion?

Paper copies of the comprehensive plan will be on view at the Library when available. Plans will also be posted here.

Why is the Library expanding?

The community has outgrown the existing space as the population and demographics of the area have changed. The population of Hays County alone is four times what it was when the original Library building went up, and the Wimberley area has grown accordingly. At the same time, the median age of residents has decreased – meaning more children need more children’s resources. In addition, few free meeting spaces are available in town. Accordingly, some of the priority expansion efforts were directed to adding children and teen space and programs, meeting spaces, additional storage space and space for more adult programs. The Library staff and members of the community conducted a comprehensive needs assessment to determine what should be included in an expansion program.

How much money do we need to raise for the expansion?

The current building expansion is budgeted at no more than $5 million.

How is this money being raised?

The bulk of funding is expected to come from Hays County’s issuance of Certificates of Obligation in the amount of $4 million. This essentially amounts to a loan that will be paid back with modest interest over a period of time with sales tax revenue. Another $1 million must be raised from other sources. Other initiatives are under way. First, we are appealing to all Wimberley area folks who can donate small amounts – from $10 a month, to single bequests under $1,000. We target those folks who USE the Library, asking them to give back. Second, we are appealing to wealthy individuals who support community projects. We are asking them for $1,000 to $50,0000, depending on their resources. Third, we are seeking corporate donors and other philanthropic organizations that provide grants to community organizations. Fourth, the library district receives revenues from local sales taxes that are in turn used to run Library operations. The district board has frugally managed this money and is saving some each month to add to the building fund.

If the library is getting $4 million in borrowed money to build this expansion, how will my money be used? Will it be repaying the borrowed money? How can I be sure money I donate for something specific will be used for that rather than repaying debt?

The Library trustees are contractually and legally committed to paying back the $4 million in Certificates of Obligation with funds raised only by sales taxes. The Trustees cannot raise the sales tax revenue rate, so will exercise good stewardship to meet the repayment schedule while not affecting activities of the Library. If you are interested in designating a gift for a specific purpose, the Foundation will sign a contract with you, assuring you that your wishes are carried out.

When will the planned expansion begin and be completed?

We anticipate that, depending on the success of fund-raising, construction will begin in 2021 and be completed within 18 months.

Who will actually build the expansion?

An experienced construction company will be selected, following a bidding process. The construction company will be overseen by the project management firm of AG/CM, which has offices in major Texas cities such as San Antonio and Austin, and two project managers who actually live in Wimberley. The project manager will be supervised by the building committee, which reports to the full board of trustees. Chair of the building committee is Aileen Edgington.

What specific changes are planned in the expansion?

a. Addition of a new wing to the northwest of the present facility. It will be a two-story wing including about 8,000 square feet per floor. The upper story will be left unfinished until needed.

b. The new wing will include large children, tween and teen areas. Exact configuration will be worked out by the building committee, the project manager and the architect.

c. The young people’s wing will open internally to the library, and externally to an enclosed play area, with a porch allowing parents to supervise children in the play area.

d. The new wing will include not only areas for children, tweens and teens, but also meeting rooms that can be configured using moveable walls. Patrons can have access to this area outside normal business hours on a prearranged basis. The meeting spaces will be configurable as large, medium, and relatively small areas via movable partitions. One of the meeting areas will have a kitchen attached for catering and for cooking demonstrations.

e. Some of the existing adult area – the fiction, nonfiction, book club and large print areas – will remain unchanged.

f. The existing computer area, reference desk, Friends shelves, young adult section, DVD carousels and audio book section will become the adult area, with computers, books, DVD’s and audio books. A “quiet” area will be created by enclosing part of what today is a front porch facing to the south.

i. The existing restrooms will not move but will be renovated.

j. The existing parking lot will be expanded to the north, possibly with another connection to FM 2325 at the traffic signal.

k. The existing parking lot entrance from FM 2325 will be widened.

l. Following the lead of the Wimberley school district board to make Blue Hole Primary School a One-Water facility, our board has decided to make the Wimberley Village Library a modified One-Water building. We are partnering with the Meadows Center for Water and the Environment at Texas State University to bring this to reality.

m. The board, building committee, project manager, architect and contractor will determine the feasibility of using solar power to provide electricity for the entire completed project, and will also focus attention on the need for clean air circulation throughout.

Will all these changes be finished at the same time?

No. Construction is planned in phases, starting with the new wing and parking lot. Another phase will involve minor renovations to the existing Library and the addition of a “quiet” area by enclosing part of the south-facing porch. The new play area will also be built during this phase.

What does the library need?

Right now, the library has a single large space that accommodates up to 45 people, (called the Friends Multi-purpose Room), for public activities such as chair aerobics exercise class and most other children’s and adult’s programs. Everything from a go-kart rehab teen project to classes on how to make kombucha, sewing, cooking, science experiments, book clubs and a multitude of other programs aimed at patrons and members of the public keep this room in almost constant use.

Because of lack of space, some of our most popular summertime programs must be conducted on one of the two main library collections areas.

How you can help

a. Make your donation to the Wimberley Library Foundation. The foundation will accept your funds, send you a Thank You and an IRS receipt and put the money into its general fund, all of which will be used to pay for Library development and expansion. The mailing address is P.O. Box 1240, Wimberley, TX 78676.

b. Make a bequest in memory of someone: If you wish to donate in memory of an individual, notate such on your check. The same process as described above will occur, AND the nearest known kin of the memorialized person will be notified of your donation. And, if your donation is of a substantial size, there may be naming opportunities in the planned expansion space. Ask to speak with a Foundation member regarding that.

One time, or recurring? The foundation is the only entity set up to handle recurring donations without requiring separate checks. If you are interested in making a monthly bequest to the future expansion of the Library, go to www.wimberleylibrary.org and hit the DONATE button at the top of the home page. A company associated with the library handles the automatic billing of a credit card or bank account and transfers the money to Foundation accounts.

Can I put a bequest in my will? Certainly. The foundation would love for you to add appropriate language in your will to make a specific value or percentage bequest. Please ask a foundation representative for specific suggestions. The foundation is specifically commemorating those who donate at least 1 percent of their estates as “Legacy Gift Club” members, with an appropriate memorial to be displayed in the Library.

Can I donate directly from my required IRA depletions after age 70? Yes, you can arrange a direct transfer to the Foundation from your IRA. This meets the requirement of a mandatory withdrawal.