The movie that won Best Documentary was called “30 Feet at a Time.” The film producers and participants shown below are, from left, Rodger Marion, Wojciech Lorenc, Richard Page, Barry Underhill and Purly Gates.

Congratulations to them and those other 20 film-makers who had movies shown during the festival.! 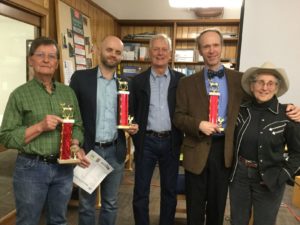