Book proceeds are being divided up

Back when a committee of Nancy Williams, Steven Klepfer and Carroll Wilson, then circulation librarian, first began thinking about putting together a book that would include the stories of survivors of the Memorial Day flood, our first chore was to raise some startup funds through grants from the city, the library trustees and the Wimberley Institute of Cultures.

The grants paid for the first print run of 1,000 books, and when those sold the proceeds went to pay for the second run of 1,000 books. Anything we had left over after selling all the books, we announced we’d be giving to one or more local charities.

Well, our small committee came together last week and learned that we have only about 170 books that have not been sold, and we have about $17,000 on hand to distribute. The committee has made decisions about where the funds should go, and the distribution list will be announced this week, first on Wimberley Valley Radio 94.1 tomorrow afternoon and then in The View.

I’ll also update this blog so you’ll know right away we kept our promise.

Thanks to all participants and to all those who purchased the book! 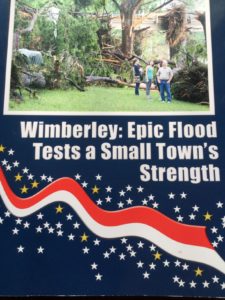