In the past, the Wimberley Film Festival at the library has attracted fewer than 50 participants. That’s not a bad number, but we have hoped over its five-year lifespan for more growth.

And, boy, did we get it last Saturday night.

About 170 people showed up for the festival, this year co-sponsored for the first time by the foundation and the Wimberley Valley Chamber of Commerce. At least 60 people had to stand because we just didn’t have enough chairs in the building, and no place to put them even had we had them.

Free space where 170 people can come together for a single event doesn’t exist in Wimberley. And that’s one reason we found so many people in support of an expansion to the library that would accommodate a large crowd — at no charge for entry.

Drop by and see our plans. We have several public spaces included in our drawings.

While you’re there ask Carolyn Manning, our director, how you can help us reach our goal of raising about $1.7 million for the addition. 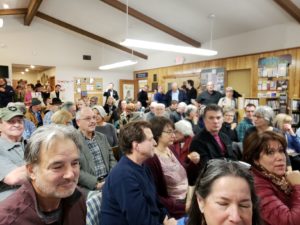 This is the crowd before the festival even got underway and even before everyone arrived.